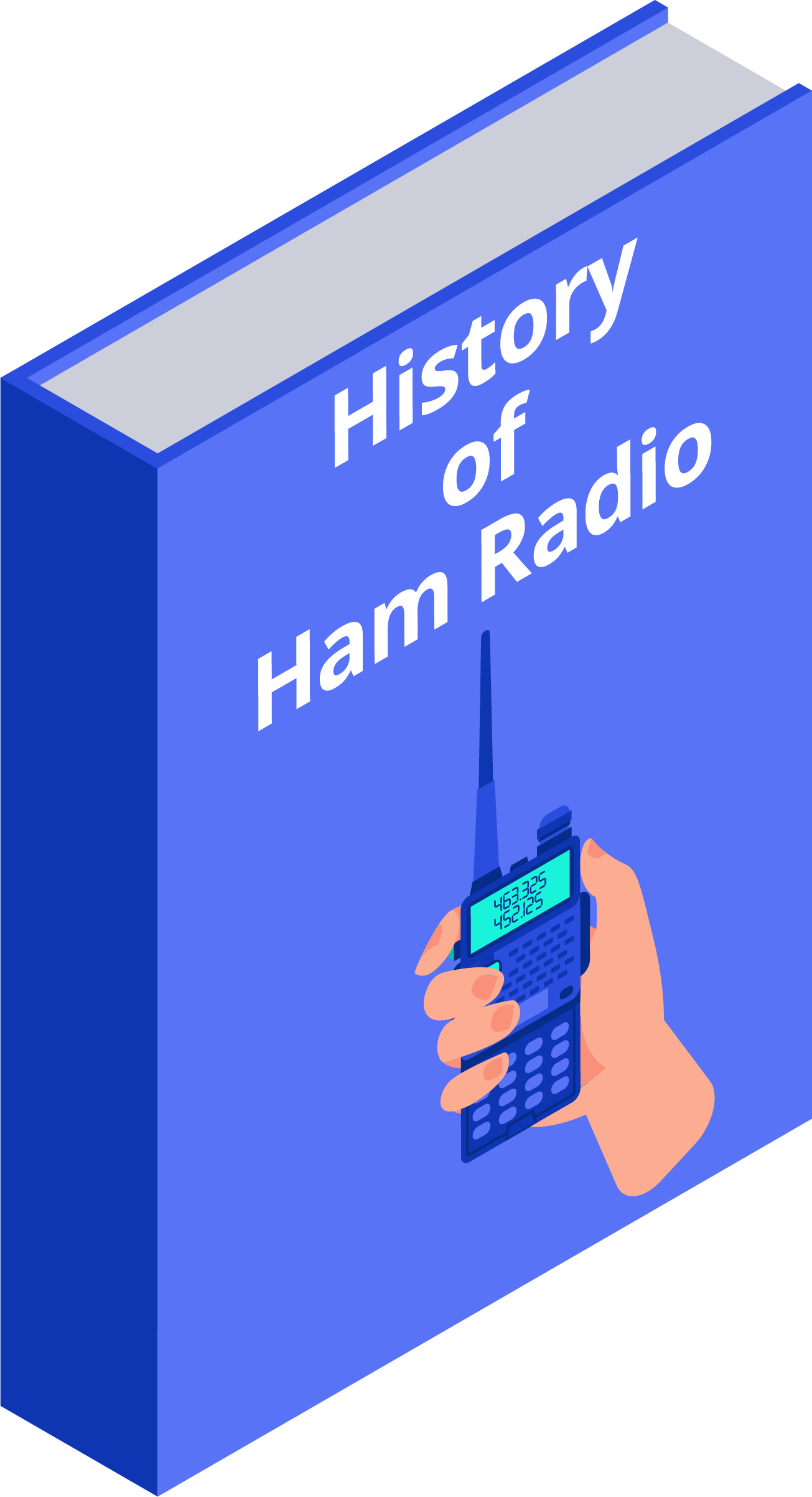 Amateur radio’s history goes back more than a century

Ham radio can be anything you want it to be. You can communicate over the airwaves much like amateurs did decades ago. You also can take advantage of the latest digital modes and be on the cutting edge of technology all from the comfort of your own home or vehicle. How did we get to where we are with ham radio today?

It’s easy to find the stories about how Guglielmo Marconi invented radio and is considered to be the first “amateur” to get on the air — way back in 1901 with transatlantic communications. Before that experiment, Marconi adapted Heinrich Rudolf Hertz’s theory that radio waves existed and constructed a communication system in the 1890s. Amateurs took to the airwaves in the early 1900s and the first “wireless” club was formed at Columbia University in 1908.

Marconi was hailed early on. Just days after the Titanic sank in 1912, a crowd assembled in New York City to cheer the man responsible for creating the technology that ensured there were survivors of that famous shipwreck. While Marconi and his family chose not to sail on the famed ship, two of his Marconi Co. wireless operators sent out telegraph signals for assistance as the vessel sank into the ocean.

Ham radio is shut down during World War I

By 1910, there were thousands of amateurs on the air across the world. In 1917, however, the advent of World War I brought an end to what had become amateur radio until after the war, when operators could resume on-air activities.

In the early days of radio, commercial, government and amateur stations all shared the same radio spectrum, using spectrum-hogging spark-gap transmissions to send Morse code. Essentially, amateurs were those who were not professional operators staffing commercial and government stations. There was so much interference in those early days that the government stepped in to assign specific bands to each type of radio user in 1912. At the time, amateurs were pushed to frequencies higher than 1.5 MHz, which was considered worthless for long-distance use.

While the start of the regulation of amateurs, who began using government-issued call signs in 1913, there was a slight decline in activity, however, it picked up again and there were as many as 6,000 licensed hams by 1917. However, World War I kept hams off the air well after the war’s end until late 1919 because the Navy refused to relinquish control of radio operations in the United States. The ban was only lifted after amateurs put pressure on Congress to allow them back on the air.

In 1923, the first transatlantic contact between amateurs in England and Connecticut occurred, opening up the world to long-distance communications. These long-haul contacts led to 1927-1928 international conferences that resulted in the designation of what essentially are today’s 80-/75-, 40-, 20- and 10-meter bands and the creation of call signs by country. Previously, hams typically used their initials as their identifiers on the air. By the end of the 1920s, hams were given bands from 160 through 5 meters, as well as some additional bandwidth on UHF at 400 MHz.

Hams migrated from spark gap to Morse code in the 1930s

The 1930s saw the end of those wideband spark-gap transmitters as tubes allowed hams to operate Morse code over CW on specific allocated frequencies. Some hams started experimenting with transmitting voice over the airwaves, too, during the decade. While single sideband operation was generating minor interest in the 1930s, it wasn’t until 1947 when SSB experiments were carried out on ham HF frequencies.

The advent of World War II saw amateur activities halted in Europe, as well as Canada. In 1940, the U.S. government issued an order prohibiting U.S. hams from communicating with any foreign stations and they were banished to operations above 56 MHz.

During World War II, hams were restricted to VHF frequencies

Wartime amateur activity in the United States was halted after the Pearl Harbor attack in 1941, although VHF operations on 112 MHz was allowed by those hams operating under the auspices of the War Emergency Radio Service. While there were 60,000 hams at the time of WWII, an estimated 25,000 of those operators were serving in the armed forces.

When Germany occupied Poland during WWII, a priest, Father Maximilian Kolbe, SP3RN, was arrested by the Germans because they believed he was involved with espionage in the use of his ham station. He was taken to Auschwitz in 1941 and when 10 prisoners escaped from there, the Germans ordered that 10 prisoners be killed in retribution. Kolbe volunteered to take the place of one of the men condemned by the Germans. In 1982, Pope John Paul II canonized him as a saint, an apostle of consecration to Mary, and he was declared a martyr of charity. Today, Saint Maximilian Kolbe is considered the patron saint of hams worldwide.

When wartime operations ended in 1945, hams resumed VHF operations until all HF bands were restored for use in 1946. The 2.5- and 5-meter bands became the 6- and 2-meter bands, and the availability of war surplus VHF gear saw a rise in new activity above the HF bands. The late 1940s also saw the development of amateur RTTY, or radioteletype, again because of war surplus availability.

In the 1950s, the old Class A, B and C amateur licenses were renamed Advanced, General and Conditional, while the Federal Communications Commission created even more new classes: Novice, Technician and Extra. Novice licenses were issued for one year and could not be renewed, and offered operation on two HF band segments as well as voice on 2 meters. Those early Technician licensees were restricted above 220 MHz. Novices and techs were required to take a Morse code test of 5 words per minute, while the other classes required a code proficiency of 13 words per minute.

More than 15 years before man was to walk on the moon, Ross Bateman, W4AO, and Bill Smith, W3GKP, bounced 2-meter signals off the moon from a station in Virginia in 1953 — and moonbounce was born.

The 1960s were significant in amateur radio history because of the development of the use of OSCAR (Orbiting Satellite Carrying Amateur Radio) satellites for space communications, as well as a beginning interest in FM repeaters.

However, repeaters weren’t cemented into amateur operations until their expansion in the 1970s, primarily on 2 meters and some on 440 MHz. When the FCC told commercial licensees that their bandwidth for operations was being tightened up, the market opened up for hams to acquire outdated commercial repeaters for retooling on the 2-meter and 440-MHz bands. In addition, hams gained new privileges in 1979 when the 10-, 18- and 24-MHz bands opened up for use.

The early 1980s not only saw the rise in personal computing, but what it brought to amateur radio. The FCC approved the use of ASCII signals on ham bands, and that gave way to packet communications, or basically keyboard-to-keyboard communications over amateur frequencies.

In 1983, astronaut Owen Garriott, W5LFL, communicated with hundreds of hams while aboard the Space Shuttle high above the earth. Since then, almost every shuttle crew has included licensed amateurs who have spent time on the air in space. In 1984, the Volunteer Examiner Coordinator program was initiated to allow hams to take exams in their own communities, rather than driving to FCC offices for anything other than a Novice license.

Morse code is removed as a requirement for ham radio licensing

1991 saw one of the biggest changes in amateur radio when the FCC agreed with the American Radio Relay League and decided to create a new no-code Technician class license that eliminated the need to demonstrate Morse code proficiency. The change swelled the amateur ranks, resulting in more than 700,000 licensed hams in the United States before the start of the new millennium. Because the only difference between Techs and Generals was that Generals had Morse proficiency at 13 words per minute, Technician-class licensees who took a 5-words-per-minute Morse code test could obtain Novice HF privileges, giving rise to yet another class of ham called “Technician Plus.” Those Tech Plus licensees later were eligible to obtain General class licenses in the 2000s. Tech Plus licensees eventually outnumbered Novices.

In 2000, however, the FCC reduced the classes of ham licenses from six to three: Technician, General and Extra, where it remains today. Those with Advanced, Tech Plus and Novice licenses are allowed to renew their licenses even to today, however, no new such licenses have been issued since then. Also, the Morse requirement was streamlined, reducing the code speed for Extra licensees from 20 words per minute to 5 words per minute, and from 13 words to 5 words for the General license.

International regulations adopted in 2003 allowed nations to determine individually whether or not amateurs should demonstrate Morse code capability for HF operations. As a result, the FCC announced in 2006 that it was eliminating the code requirement for new licensees and made the action effective in 2007. As a result, all Tech licensees were granted Tech Plus privileges for HF operation and the two Tech classes were combined into one. The change resulted in many newly licensed hams who had been stymied in the past because of the Morse barrier.

In more recent times, hams were used for disaster relief help after the September 11 terrorist attacks in 2001 and Hurricane Katrina in Louisiana in 2005. In 2017, the American National Red Cross assembled a team of 50 hams who traveled to Puerto Rico after the island territory was devastated by Hurricane Maria in an effort to reestablish communications networks.

In an effort to get more hams licensed and on the air, Ham Radio Prep started operations in 2018 with a new concept. The unique online study system established by HRP allows persons to use videos to learn the tenets of amateur operation in an easier-to-follow system.

Then, in 2022, the members of Ham Radio Prep started the American Radio Club to continue to grow the community and advance amateur radio together.

Today, amateurs keep on the cutting edge of technology by transmitting signals that can be seen on televisions or by using the extensive worldwide network of Digital Mobile Radio, allowing hams to communicate with one another anywhere in the world with simply a handheld digital transceiver. The one thing that remains, however, is that the amateur radio service remains as much of an experimental service as it did in its formative years.