Ham Radio Range: A Guide to How Far You Can Talk

One of the most frequent questions that newcomers to amateur radio ask is, “How far can you talk on ham radio? One answer is “all around the world.” An equally common, but equally vague, answer is, “It depends.”

Both answers are correct, but perhaps an even better answer is a combination of the two. What I’d say is, “You can talk all around the world on ham radio, but it depends.” The distance a signal will reach depends on a lot of things, including:

Arguably, the biggest factor that determines how far you can talk on the radio is the frequency you’re operating on. Here’s a chart that shows the radio spectrum and all the different frequency bands that are available to amateur radio operators: 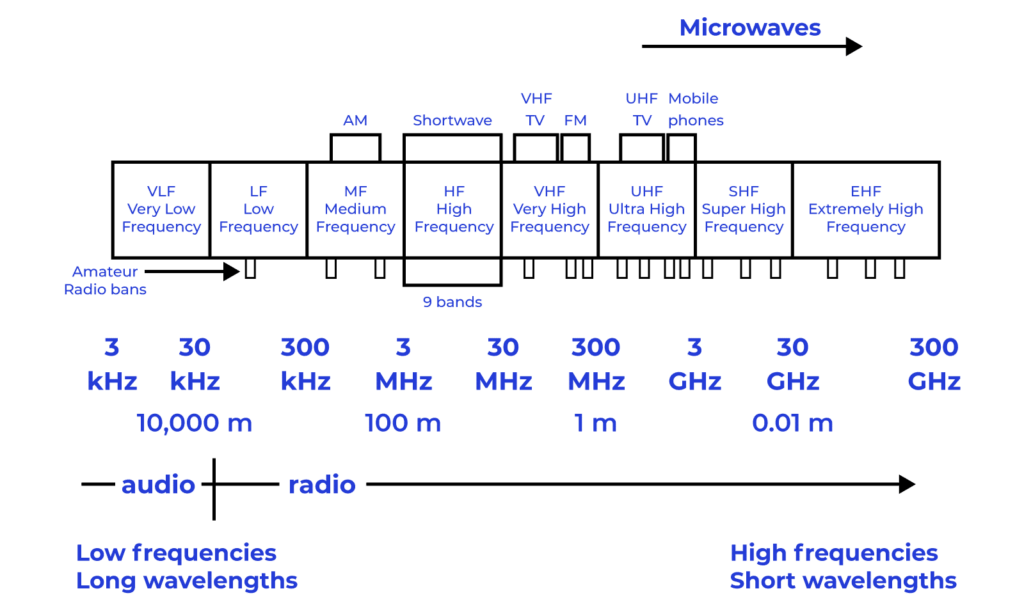 Amateur radio operators can transmit on frequencies as low as 136 kHz and as high as 250 GHz. Since most newcomers buy radios that operate in the VHF and UHF regions, let’s look at those bands first.

For example, if you and a friend are using handheld transceivers (HTs) with a typical output power of 5 watts, you can expect your range to be about 5 miles maximum. Of course, this depends on the terrain and other obstacles that might block transmissions, so in urban settings, your range will be much shorter.

For example, if you and a friend are using handheld transceivers (HTs) with a typical output power of 5 watts, you can expect your range to be about 5 miles maximum.​

If you’re using a repeater, however, you should be able to talk much farther. Repeaters typically operate in the 2-meter band and 70-centimeter band and extend the range of VHF and UHF radios. The range of a repeater station is highly dependent on how high the antennas are and the terrain. A repeater station located in the mountains, for example, may have a range of hundreds of miles, while a repeater located where the terrain is relatively flat, such as here in Southeast Michigan, the range will be more like 50 miles or less.

For example, if you and a friend are using handheld transceivers (HTs) with a typical output power of 5 watts, you can expect your range to be about 5 miles maximum.​

In general, if you want to talk to other amateur radio stations around the world, you’re going to want to operate on the high-frequency (HF) bands. As you can see from the chart, there are 9 amateur radio bands in the HF portion of the spectrum.

The reason for this is that radio waves with a frequency between 3 and 30 MHz will, under the right conditions, refract off the ionosphere, as shown in the figure below. The radio wave is called a sky wave, and the distance between the transmitter and the spot where the sky wave returns to earth is called the skip distance. The skip distance depends on a number of factors including the frequency of the sky wave and how well the ionosphere happens to be reflecting at the time, but skip distances can easily reach 3000 miles or more. And, skywaves can make multiple “hops,” enabling world-wide communications.

One of the keys to good skywave propagation is the condition of the ionosphere. The more energetic the ionosphere is, the better it will refract radio waves. This energy comes from the sun and increases and decreases over an 11-year cycle, sometimes called the sunspot cycle, At the peak of the sunspot cycle, worldwide communication on the HF bands is possible with low power and simple antennas. At the bottom of the cycle, long-distance communications it is still possible, but more difficult.

Skywaves with frequencies above 30 MHz tend to go right through the ionosphere and head off into space (with some exceptions, of course). This is actually a good thing. For example, we use frequencies in the VHF, UHF, and microwave portions of the spectrum to communicate with satellites and other spacecraft. It would be impossible to communicate with the International Space Station (ISS) if all radio waves were reflected by the ionosphere.

Note that there are many exceptions to what I’ve described above. There is, for example, a propagation mode called “sporadic E” allows long-distance communications on 6-meter and 2-meter frequencies, frequencies that are normally restricted to line-of-sight communications. Learning about these modes and figuring out how to use them is part of the fun of being a radio amateur.

Continue the discussion at community.americanradioclub.com