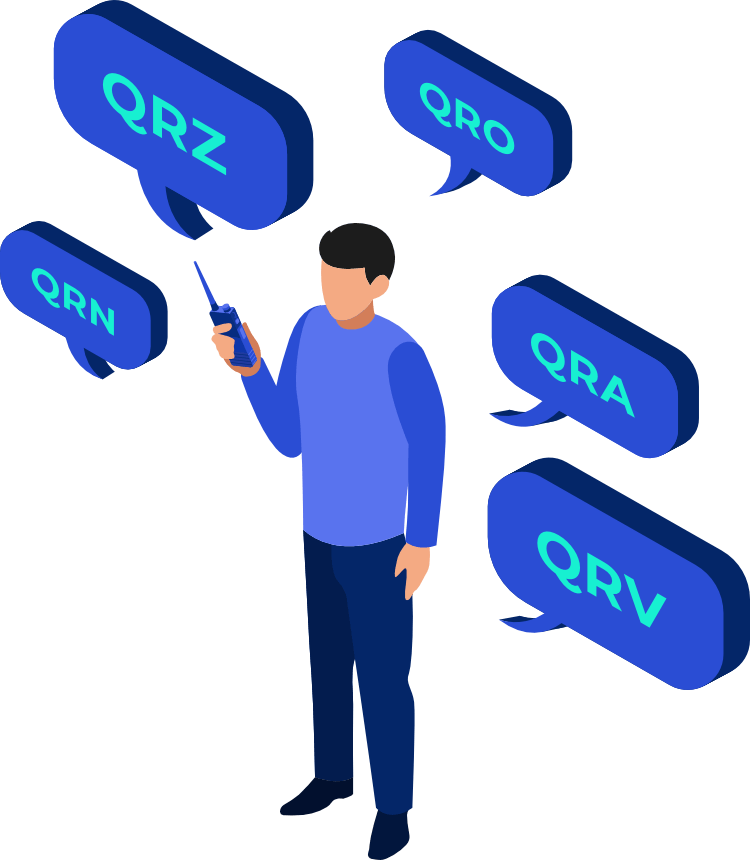 On a local repeater, you’ll often hear someone say, “QTH here is Springfield” or “Let’s QSY to the .96 machine.” These hams aren’t using some secret code—secret codes aren’t allowed on the ham bands. They’re using Q-codes.

What are Q Codes?

Q-Codes (also called Q-Signals) are three letter combinations that begin with the letter Q that CW operators use in place of common phrases. Originally intended for use only by radiotelegraph operators, Q-codes have become a permanent part of the hobby’s jargon, and many hams use them on phone as well as in face-to-face conversations.

For example, QTH stands for “My location is _____.” So, when I send QTH ANN ARBOR MI I am telling the other operator that I am located in Ann Arbor, MI. When followed by a question mark, the Q-signal turns into a question. So, QTH? asks the question, “What is your location?”

The Origin of Q Codes

The original Q-signals were created in the early 1900s by the British Postmaster General for use by British ships and coast stations. They proved to be so useful, however, that radio operators worldwide began using them. One reason they proved to be so useful is that they can even be used by operators speaking different languages. When an English-speaking operator receives QTH? they understand it to mean, “What is your location?” A Slovak-speaking operator will translate that to, “Aká je tvoja poloha?” while a German-speaking operator will hear, “Wo befinden Sie sich?”

At the Second International Radiotelegraph Convention in London in July 1912, the delegates adopted a list of 45 different Q-codes. Many of these Q-codes are no longer used. For example, QRF stands for “I am bound from ________.” But, many, such as QTH, QSY, QRM, and others, are still used today more than 100 years later.

Here’s a list of the Q-codes that are still in use on the ham bands today: 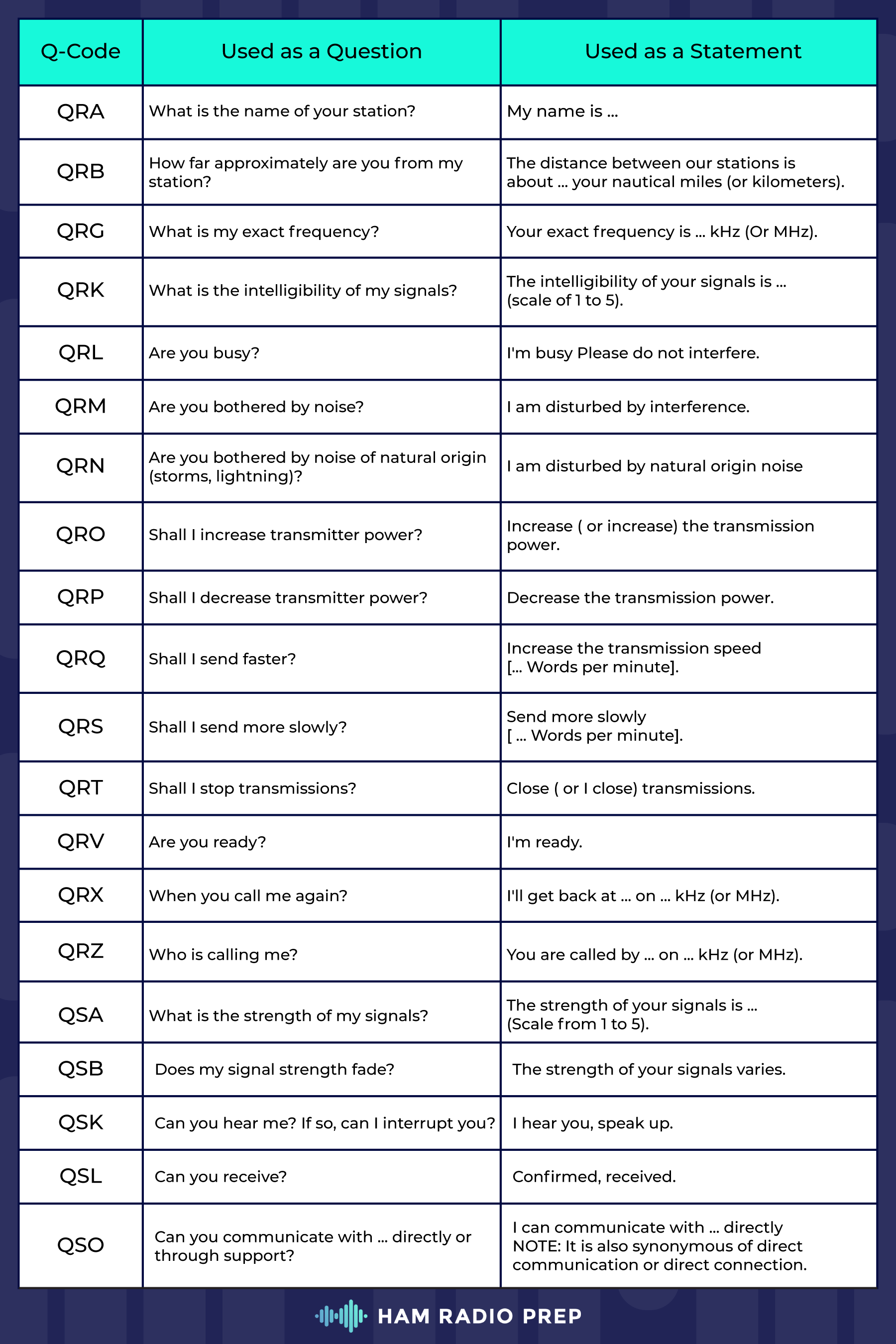 How to use Q Codes

QRM is often used (incorrectly) as a noun. For example, someone might send, LOTS OF QRM TONITE.

Like QRM, QRN is often misused as a noun. For example, someone might send, LOTS OF QRN ON THE BAND TONITE.

QRO / QRO? – I will increase power. / Shall I increase transmitter power?

Often, QRO is used as an adjective. For example, someone might send, I AM QRO NW, meaning that his transmitter is running a significant amount of power, usually more than the 100 watts of output power that most HF transceivers have today.

QRP / QRP? – I will decrease power. / Shall I decrease transmitter power?

QRP is most often used as an adjective. If someone says, RIG HR IS QRP, what they mean is that the power output of the transmitter is 5 W or less. To qualify for the QRP category of most contests, your transmitter output power must be 5 W or less.

Feel free to use this Q-signal should you get into a contact with someone who is sending faster than you can receive. The courteous thing to do is for the faster operator to slow down when requested to do so.

Common amateur usage is a little different than the original meaning. When someone sends MUST QRT  or WILL QRT they mean that they are going to go off the air.

This Q-signal was originally used by amateurs who were sending and receiving radiograms. They would use this Q-signal to signal the other operator that they had no messages for them or to ask if they had any messages that needed to be passed. Now, however, you’ll sometimes hear stations say, I AM QRU, meaning that unless you have something further to say, they wish to end the contact. They probably also mean this if they send QRU?

Originally, this meant that a station was ready to copy a message. Nowadays, it means that they are ready to get on the air.

In contests or DX operation, a station will often send QRZ? to denote that he’s finished with one contact and will begin listening for other stations. This is a little different than the original meaning.

QSB / QSB? – Your signals are fading. / Are my signals fading?

Like QRM and QRN, QSB is often used as a noun (instead of the word “fading”) even sometimes as an adjective. For example, someone might say, THE BAND IS VY QSB TONITE.

QSL was originally meant to be used to acknowledge receipt of a formal message. Now, it is often used to denote that a transmission was received, whether or not it contained a formal message. We also use it as an adjective, as in “QSL card.” A QSL card acknowledges that we had a contact with the station to whom we sent the card.

QSO was often used in the early days of amateur radio when the range of a station was limited and stations relayed messages from one to another. Nowadays, we mostly use QSO as a noun, meaning a contact with another station.

You often hear QTH used as a noun. People often send QTH IS ________. While not an egregious use of this Q-signal, it is technically incorrect.

Keep in mind that you may hear these Q-codes when you’re operating any of the voice modes or when talking with other hams at club meetings or hamfests. So, even if you’re not a CW operator, you’ll want to know these codes so that you’ll understand what’s being said.