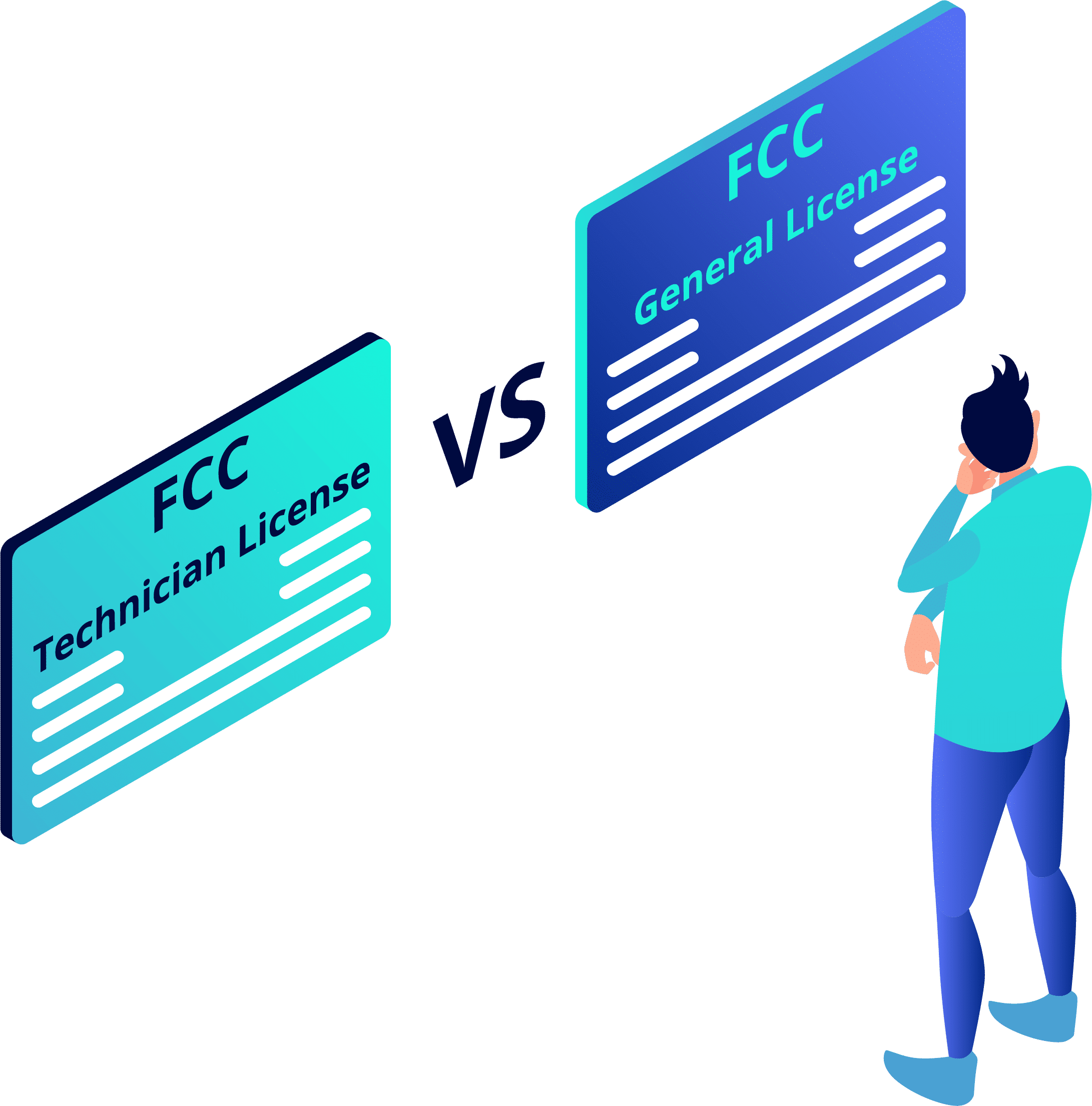 You want to get your amateur radio license, so where do you begin? You know you need to take an exam, but what options are there?

The Federal Communications Commission licenses new hams in one of three classes: Technician, General and Extra. The Technician class is entry level, while General is the next step up. As you can guess, the Extra class license is the top shelf!

What’s the difference between the classes and which exam(s) should you take?

Start with the Technician class

The Technician exam is today’s entry point into ham radio. You have to start here before moving up to the other two classes. Likewise, you need to become a General class ham before you move on to taking the Extra exam.

Can you take all three exams in one sitting? You sure can, but very few do that! However, there are some new hams who study for both the Technician and General exams and take both at the same time. The benefit of taking two (or three) exams in one sitting is you will pay for only one exam. The volunteer examiners under the American Radio Relay League, for instance, charge $15 in 2020 for one, two or all three exams at one time.

Many hams take the Technician class test and remain “Techs” for a long time. Others upgrade to the General class to obtain additional operating privileges. Ah, so that’s why you might want to upgrade!

Many Techs are quite happy with the ability to operate on the popular VHF and UHF ham bands with their license. The 2-meter band at 144-148 MHz and the 70-centimeter band from 420-450 MHz offer direct base and mobile operations in your general vicinity, as well as wider areas through repeaters that “repeat” your signal to other hams. Many hams have dual-band radios that allow operation on both bands.

Other bands that Techs can operate on with readily available equipment include the 6-meter band from 50-54 MHz, the 1.25-meter band at 222-225 MHz and the 23-centimeter 1240-1300 MHz band. The 6-meter band sometimes allows extended range because of band conditions — it’s possible that you can talk to other hams several states away on this “magic band.” Most times, the band is relatively quiet.

Technicians can talk around the world, too!

But wait; there’s more! Not only can Techs operate on all VHF and UHF ham radio frequencies from the 6-meter band up through the millimeter-wave bands, they also can operate on HF (high-frequency) bands, which also are known as the shortwave bands. These bands afford worldwide communication, depending on the band and current propagation.

Techs can operate in CW (Morse code) mode on HF on the 40-, 15- and 10-meter bands on a narrow swath of frequency segments, as well as RTTY (radio teletype) and data on the 10-meter band. So you’re thinking: What’s the enticement to operate HF as a Tech if you are interested only in voice communications? Well, Techs can operate voice on the 10-meter band in the 28.3-28.5 MHz segment. There is plenty of room in that bandwidth when 10 meters is open (the band conditions are just right) to round up a bunch of contacts all around the world. The 10-meter band is fun to operate on and Techs can transmit up to 200 watts PEP (peak envelope power) on 10 meters.

The advantage of upgrading from the Technician to General class is not only additional bands that you can operate on, but also an increase in power. While Techs are limited to 200 watts on HF, Generals can transmit with up to 1,500 watts PEP on the HF bands. That’s a lot of power!

The biggest incentive for upgrading from Tech to General is the increased HF privileges. Generals can transmit on two new longwave bands that are below the AM broadcast band, as well as 10 HF bands that allow worldwide communications in a variety of modes. Many hams who go for the General class license do so because they want those HF privileges.

If you are interested in providing emergency communications, having access to most HF bands almost is a necessity so that you can pass or receive traffic depending on the propagation at various times on each band. General class licensees have access to all amateur bands, just not every amateur HF frequency. During disaster situations, amateur HF communications get through without failure.

Also, Winlink is an HF-based email system that can be used nearly anywhere in the world. Winlink is just another good reason to get your General license if you are interested in being able to provide a service through your ham station or you have a need to send messages from remote places.

What’s best for you?

If you’d be happy with just using VHF and UHF radios, the Technician class license would be perfect for you. Handheld and mobile radios are readily available at reasonable prices that will let you connect with many hams in your general locale.

If you want to talk to the world and don’t mind spending typically more money for HF radios and antennas, then the General class license will be your fun zone.

What about the Extra license?

So if you want VHF/UHF with a little HF, or you want a lot of HF, or you want HF with extra benefits, there is a ham license just for you. The best thing is that you can stay at any class for as long as you wish before you upgrade — if you even want to upgrade.